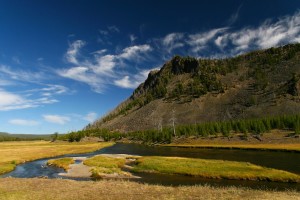 As part of the Rio Grande River drainage, the area now known as Conejos River has been home to a variety of peoples over the past several thousand years. The great San Luis Valley was home to a variety of civilizations that struggled with and against each other to find a place of good food, potential shelter, and reasonable climate.

Various populations found themselves either coming into the area by choice or being pushed them by population growth in other areas. Shortly before the Europeans came on the scene during the late 1600’s, growing populations along the lower Rio Grande and in the southern plains pushed the people who were closer to the mountains into the high San Luis Valley. The Apaches and Utes were quite willing then to displace any previous residents and take command for themselves. Their struggles with each other were as much for pure rivalry as for survival.

The first Europeans, Spanish explorers and soldiers, came to the Conejos River area only for excitement and for gold and silver. Mines in the area date from the middle of the 16th century.

The lower valley was actually settled beginning in 1854 with the arrival of major LaFayette Head and Selendonio Valdez. This first successful colony was at Servilleta, five miles east of the present town of Conejos.

Conejos became a town of considerable importance with a courthouse, a general store, the governor’s palace and a flour mill. The Roman Catholic Church built Our Lady of Guadalupe Church, finishing it in 1866. It is known to be the oldest church in the state.

In Conejos County there is little note of ethnic struggles except in the northern end. There, more recent arrivals, the Mormons, have created some ethnic awareness. When considering their heritage, Hispanic persons in the county typically will trace directly back to Spain rather than note the bypass through Mexico. Most of the early residents could be noted as having lived in Mexico only because Texas, at that time, was a part of Mexico.

Antonito and Conejos are two of the oldest towns in the United States. At People’s Drug Store in Antonito you can belly up to the hardwood counter and drink a milkshake made from hard ice cream and milk in an eight-beater milkshake maker. Have a little malt tossed in from the malt dispenser, and you have a little taste of the good life.

The communities have a bit of Old Spanish charm and graciousness in them. The people are warm and open to visitors, preferring to include strangers into their discussions and debates rather than shut them out. Visitor services are good and community agencies go out of their way to be helpful the traveling people, whether they be laborers, business travelers, or tourists.